A sight for sore eyes!

After a few days in Bangkok, we headed to Dolphin Bay Resort, around 3 hours south of Bangkok, and about 30 minutes south of Hua Hin.  We wanted to go to a beach within driving distance of Bangkok where we could just relax and do nothing, and this fit the bill perfectly.

The hotel (it’s definitely not a resort, despite the name) is across the street from the beach, and has a few salt water pools and a good restaurant.  The beach isn’t the pristine aqua blue water beach that you see in the Thailand guidebooks, but it was shallow, there weren’t many waves, and the water was nice and warm.

There were massive jellyfish that washed up on shore  each afternoon as the tide was going out, but luckily we didn’t encounter any in the water.

It’s definitely a family-friendly hotel, and everyone there either had kids or was retired.  There are a bunch of excursions you can go on, and we would have taken advantage of that if we thought M could have handled it.  But we were pushing the baby envelope enough by introducing him to water, sand, heat, having to wear a hat, and swimming pools all at one time.  So we just hung out on the beach, by the pool, and in our air-conditioned hotel room.

The hotel also has a spa  where you can get Thai massages and other stuff.  One afternoon we took turns watching M and each of us got an hour-long massage.  It was heavenly.

If I’m being honest, my favorite thing about the hotel was going downstairs every morning for breakfast and being greeted with the smell of bacon.  Every morning, I ate bacon.  It was wonderful.

After a few days of eating at the hotel restaurant, we decided to venture out a little, and we discovered a wonderful place called Meaw Restaurant that had tables and chairs set up in the sand by the beach.  The food was better and less expensive than our hotel, so we went back for lunch and dinner every day after that.  Plus the waitress would bring our food and then take M, fan him, and coo at him while we ate.

We almost didn’t give Meaw Restaurant a try simply because of the name.  It looked too much like “meow,” which is a little ridiculous, but we wouldn’t go to a Woof Restaurant or a Neigh Restaurant, so there you go.

One night while we were eating dinner at Meaw, a very nice young lady asked if she could hold M.  We said yes. Then she gestured, asking if she could take him to the open-air bar next door.  She seemed harmless enough so we said yes (questionable parenting choice? maybe.), and she was back less than a minute later because M was starting to get fussy.  Apparently she walked up to a dude there, claimed M was his, and that he needed to give her money.  Ha!

Overall, we had a nice, relaxing vacation in Thailand, to the extent that that is possible with a baby. Neither of us wanted to leave!

We had a chance to get out of Dhaka for about a week, so we headed to Thailand.  Since this was our first “vacation” with M, we wanted someplace where we wouldn’t have to do too much in order to have a nice, relaxing time.

Temples in the Grand Palace complex

We spent a few nights in Bangkok when we arrived, and then another night the day before we flew back to Dhaka.  We had one full day before heading to our hotel on the beach, and I thought it would be feasible for us to see the Grand Palace and one of the other temples.  Well, we decided to shlep to a bagel shop for breakfast that was further away than we thought (everything looks so close on the map… but it’s not) so we didn’t get in a taxi to go to the palace until about noon, and then traffic was horrid.  We arrived at the palace around 1:00, made our way through the literal hordes of tourists, and by 3:00, M had reached the end of his baby rope and was screaming bloody murder.  So we hopped in the first taxi we found and went back to the hotel.  We knowingly fell victim to a common taxi scam where the driver quotes you a flat rate probably twice the price it would cost with the meter running, but we needed air conditioning as fast a possible, so whatever. 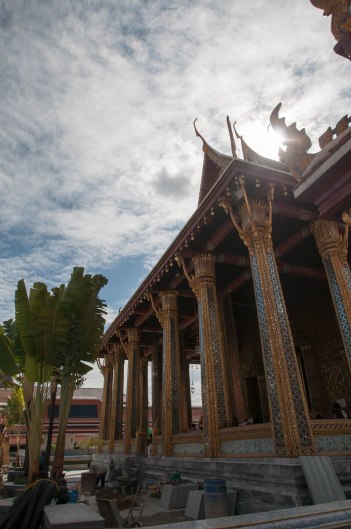 The entrance to the Emerald Buddha temple. Except it’s actually made of jade.

We didn’t make it to the other temple I wanted to visit, so I guess I’ll have to wait until the next time we’re in Bangkok to see the world’s second largest reclining Buddha.  That’s traveling with a baby: you are no longer in charge.

The main highlight of our visit to Bangkok was finally getting to see Star Wars.  Nate cared about this more than pretty much anything else, so we utilized the hotel babysitting service and went to a nearby theater. The total cost for 4.5 hours of babysitting, movie tickets for 7:30 on a Friday night at a nice theater, popcorn and soda was about $55!  In the U.S. it would have been at least double that.

Oh, we also found this nice grocery store called Food Hall or something like that, and I was in grocery store heaven.  It was aaaaaamazing.  It was basically a Thai Whole Foods, and I bought mangosteens, avocados, dried fruit, and Ghiradelli chocolate chips to bring back to Dhaka.

I could have spent another hour there, at least, but once again M insisted that things be done on his schedule (are you sensing a theme here?). I’m making the kid sound like a terror, but really he wasn’t that bad.  He did a good job considering how much time he spent in his Ergo and how stinking hot it was.  And honestly, there were times when he cried that I would have cried too, I was so hot and tired of the crowds, but it’s not socially unacceptable for adults to do that.

The first two nights we stayed at Ibis Siam, which is super convenient if you want to get out and walk around and do stuff, with a sky train station practically in front of the hotel.  There’s also a 7-Eleven in the lobby, which was awesome.

The night before we flew home, we stayed at the Swissotel Nai Lert Park, and it was fabulous.  I booked it specifically because the hotel had a babysitting service, and the more I thought about using a hotel babysitter, the more nervous I got, but the babysitter was a very kindly older Thai lady that M took to immediately.  When we got back from the movie, he was in his pajamas, sleeping soundly.  This hotel also has an amazing pool and a super tasty breakfast.  I ate so much for breakfast (crepes! pastries! donuts! bacon! waffles! roasted pork! dude, they even had dim sum!) , if I’d eaten another bite my stomach would have exploded.

Not the best photo of the Swissotel’s pool, but you get the idea

We booked the hotels through Agoda.com, which has the best rates I’ve ever been able to find anywhere.

Also, if anyone else is like “OOOOOO there’s a bagel shop in Bangkok?!” here you go: BKK Bagel Bakery near the Chit Lom BTS station.  It’s near the Haagen-Dazs, kind of on a side-street, next to the Kipling Store.  We bought a baker’s dozen to bring back to Dhaka with us, and they are actually pretty darn good bagels.  The sandwiches in the store are also tasty.

We really liked Bangkok, and since it’s so easy to get to, I know we’ll be back!