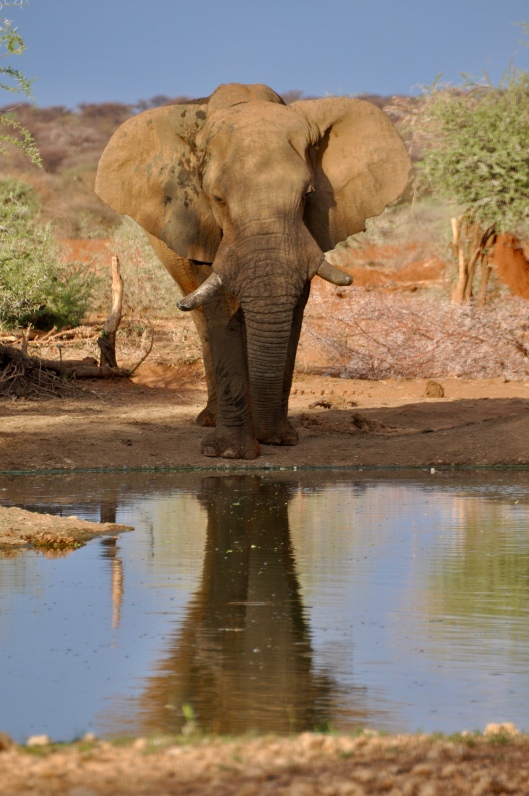 A huge elephant by the Camp Elephant watering hole

One of our best friends from Muscat came to visit us, and we decided to go check out Erindi Private Game Reserve. Just about everyone in Windhoek told us Erindi is absolutely amazing, and (spoiler alert) they were right!

There are two lodging options: Camp Elephant or Old Trader’s Lodge. At Camp Elephant, you can either tent camp or stay in a self-catering chalet. No matter which option you choose, I don’t think you can go wrong. The camping looks seriously nice: there are private flush toilets and showers, a refrigerator, hot water, grassy areas for your tent (grass!), picnic tables, and a kitchen sink. Coming from Oman where there was literally nothing if you didn’t bring it with you, the camping there is hardly even camping, other than the fact that you have to sleep in a tent. 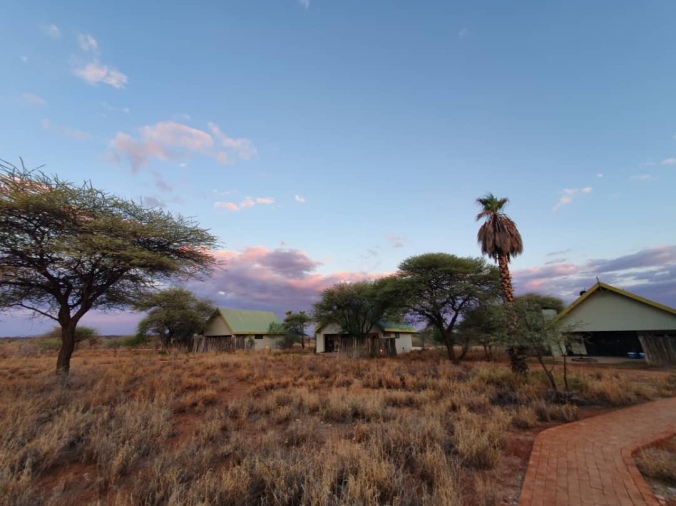 We booked the self-catering chalets since we weren’t sure if we’d have our camping gear or not. The chalets all border a watering hole and have two bedrooms, a bathroom, air conditioning, and a well-equipped kitchen with a microwave, toaster, and a two-burner stove. Then outside there’s a picnic table and two (two!) braai areas. It was awesome. 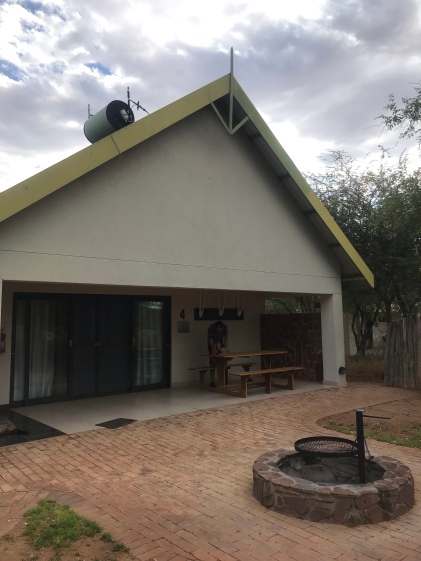 The front of the chalet, with a view of the watering hole and two braai spots 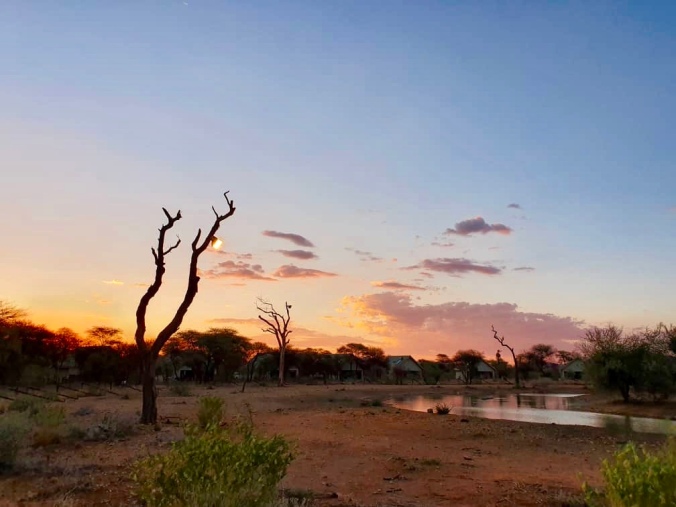 Watering hole and chalets at dusk

I can’t tell you much about Old Trader’s Lodge because Camp Elephant guests are “strictly forbidden from visiting Old Trader’s Lodge at all.” I’m guessing it’s fancy? I have no idea. I’m also curious about what must have happened to institute this ridiculous policy.

We visited Erindi on Thanksgiving weekend, so we decided to do a glamping Thanksgiving. We cooked all the food, except the turkey, on Wednesday and Thursday. We got the braai going as soon as we arrived, heated up everything else, and had a humongous feast. In hindsight, the fact that we thought we needed to bring additional food for Saturday night is laughable. We went home without having cooked some of the food we brought, and we never even had a chance to make s’mores. Oh well. Worse things have surely happened. 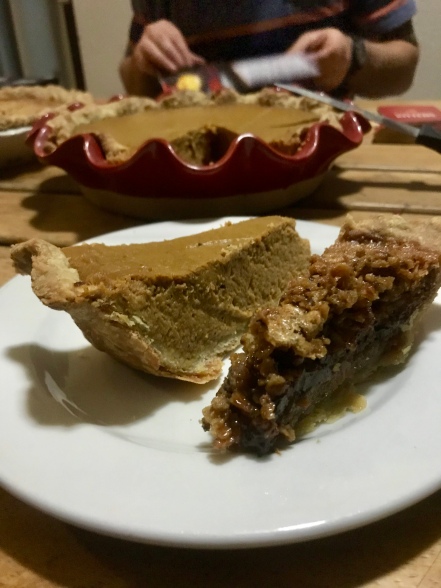 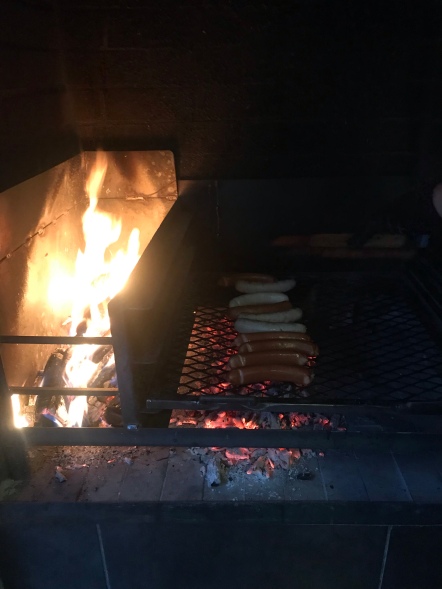 Sausages on the braai

On Saturday morning, E and I went on an early morning game drive while Nate stayed behind with M and slept in. The game drive was…. alright, I guess? It certainly wasn’t my favorite. There were a bunch of loud hungover people that arrived late, drank throughout the entire thing, wanted to wake up the lions, asked if you could hunt rhinoceros, watched youtube videos and video-chatted during the game drive, and asked the driver if he had more drinks. And the driver seemed hell-bent on driving through the tightest of spaces in an enormous safari vehicle. I sat in the middle to avoid getting swiped by thorny branches. He spent probably 10 minutes trying to drive over a tree. But we saw a male and female lion resting and then a cheetah family out on a hunt, so that was cool.

The next morning, Nate and E went on a game drive while I stayed behind with M. Their guide was awesome, super-knowledgeable about everything, and took them to see lots of lions (including cubs!). Plus there was the added bonus of no obnoxious passengers. So I guess the game drive tours at Erindi are a total and complete crapshoot.

Another option at Erindi is to do self-drive game drives. You have to stay on the road, so it’s unlikely that you’ll see any lions or large predators unless they literally cross the road right in front of you, but you’ll see lots of other neat stuff. We saw a lot of zebras, springbok, oryx, and giraffes. Plus some clusters of elephants and rhinos.

Since moving here I’ve discovered that I get carsick on the bumpy dirt roads (great timing, huh?) so Nate drove the first half and then I took over. I felt slightly better behind the wheel, but I need to buy some kind of medicine for next time.

The amount of wildlife visible from the chalets is awesome. Hippos and crocodiles live in the watering hole, and there’s no shortage of wildebeest, springbok, elephants and warthogs, plus a huge variety of birds. There are also scorpions and bat-sixed moths. A palm-sized scorpion wandered towards our picnic table while we were playing a board game outside after M went to bed. I shouted “Holy shit, a scorpion!!!” and I’ve never seen grown adults jump so quickly on top of a table.

Erindi makes for a nice weekend getaway, or a great first stop on a further-flung camping trip. There’s a surprisingly large well-stocked shop next to the reception with pretty much everything you could need if you forget something, including ice and firewood. That said, I started a list of things to make sure we bring next time: pool towels, tin foil, binoculars, extra dish towels, a silicon spatula, and a kitchen sponge.

Erindi, we’ll be back!

Update: We’ve since returned to Erindi and our second account was about the same. Guided game drives are a still complete crapshoot (even more so than last time) and the facilities are still amazing.