The other day Nate pointed out to me that this blog is called “According to Athena,” and I would be remiss if I didn’t tell you all about Athena’s new friend. 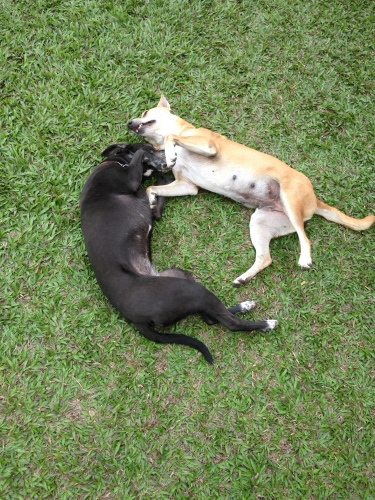 About a month ago Athena met a new dog in the field that we frequent and now they are best friends.  I mean, cuddling together, lazy wrestling, just wanting to be near each other best friends.  I actually haven’t seen her get along this well with another dog in years.  Not since her soul mate, Lincoln, moved away when we lived in Alexandria.

One day Athena’s friend followed us out of the field and to the car, and our driver asked what her name was.  I said, “I don’t know.  Brown Dog?”  So now we call her Brown Dog. 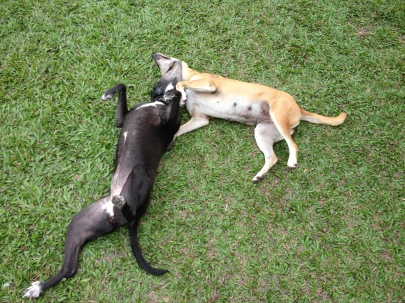 The really surprising part is that Brown Dog is also a female.  Athena is an alpha female, and most of the females here pretty much hate her.  Little do they know she’s not exactly giving them any competition, if you know what I mean.

Lately Brown Dog has been in the field almost every day, and when Athena arrives, she prances around looking for her.  I feel like Athena’s life isn’t as fun as it used to be since we can’t take her for walks anymore, so it makes me happy to see Athena having a good time!

I know I say this a lot, but time is flying by.  If the first two months of our tour here have gone by this quickly, I feel like if I blink for too long, we’ll already be packing up to leave.

We’re both busy with work and we’ve settled into our daily routines. I’ve figured out where my favorite places are to buy groceries, produce, pastries, jewelry, and handicrafts.  You know, all the important stuff.

We got a car on July 1, which has simultaneously made things a lot easier and been a huge pain in the butt.  It turns out when you buy a old SUV and drive it in pothole-riddled Dhaka, things break a lot.  I don’t know why that caught us by surprise, but there you go.  We’ve already had to replace a tire and we need to get the engine looked at.  And there was the time the car died in the DIT-2 parking lot.  Not in a parking space, but blocking traffic in the middle of the parking lot, around noon, on a hot day.  That wasn’t fun.

Really it hasn’t been that bad, I guess it just seems like it sometimes.  The ability to move around freely and go where we want outweighs the occasional car trouble.

The embassy was closed for four days for Eid festivities, and it was really nice to have a four-day weekend when you don’t celebrate the holiday that causes the time off.  We didn’t do any extravagant cooking, we had no guests, and almost everything in Dhaka was closed, so there was really nothing to do.  Most people leave Dhaka during Eid (expats go on vacation and lots of Bangladeshis go to their villages), so we were able to drive in minimal traffic and generally do nothing.  Plus it rained like crazy the entire four days, so that in itself was a great excuse to stay inside and watch Netflix all day. 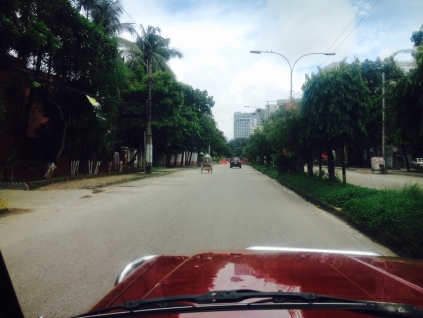 Athena has made friends with lots of street dogs, and at this point she has established areas where she knows all the dogs and she doesn’t hesitate to go running up to them. We’ve given some of them names, like “black and brown dog” and “howly lady,” and some of them we refer to by the road that they live on. I’m trying to not let myself get too attached to any of her friends, and anytime I see one of them lying on the road I worry they’re not getting up.  But our neighborhood is probably one of the better neighborhoods to be a street dog.  Actually, the only dogs I’ve seen being abused are those that are out with their “dog walkers.”

Athena and her buddies

Oh, our HHE is here!  That deserves it’s own blog post, but we’ve been busy trying to put things away, and wondering why we ever found it necessary to own so much stuff.  Our kitchen has massive cabinets that sadly do not contain enough shelves, so finding storage has been a challenge.  But, hey, at least all the kitchen stuff is actually in the kitchen, instead of being scattered in storage nooks and crannies in the study, dining room and living room! Our mentality has basically been that if we were able to find someplace for something in our house in Alexandria, we can certainly find space for it our much-larger apartment in Dhaka.

One of the most exciting things about our HHE arriving was the random consumables.  The pumpkin butter and huge chocolate bars from Trader Joe’s, real maple syrup from Wisconsin, and all of our spices have definitely made life a little better.  Given that we didn’t use even half of our HHE weight, I wish we’d stocked up more on consumables before we left, but now we know for next time.

If you live near a Trader Joe’s, please wander the aisles, savor all the goodies you could potentially buy, and know how lucky you are!

This is our first time living in a predominantly Muslim country, and we’ve learned a lot about life during Ramadan.  Every day, the fast is broken with a meal called Iftar, which begins as soon as the sun sets.  By late afternoon, it seems that everything basically revolves around where you’re having Iftar and how you’re getting there.  Some people leave work early, and traffic is a complete gridlock as everyone is on the roads to get to Iftar.

Once it’s about 6:45 pm, though, the streets are empty.  No cars, few rickshaws, and a handful of pedestrians.  It’s a Dhaka miracle.

And that’s when we take Athena for her evening walk.  It’s a wonderful, quiet time, and I’m going to miss it after Eid.

If you head out for a walk 20 to 30 minutes before Iftar, be prepared for cars barreling down the street, with little regard for pedestrians, as people hurry to get to Iftar on-time.  There aren’t many cars on the roads, but the ones that are out have no time to waste and drive even more crazily than usual.

The solitude of Iftar lasts for about 20 to 30 minutes, and then there are vehicles and people on the streets again.  Also on the streets, you will find discarded food, which makes this time of the evening Athena’s favorite time for a walk.  She goes into scavenger-mode and will not lift her nose from the ground.  Apparently the other night Nate pulled a huge meatball out of her mouth.

We avoid going for walks after about 8:45 pm because there are loads of people on the streets leaving the mosques near our apartment, and this includes mobs of trouble-making boys.  They ask us for money and try to hassle Athena, and she gets (understandably) really uncomfortable and anxious.  A few nights ago the three of us were out walking, and I had Athena’s leash. Nate was walking behind us to make sure the boys didn’t bother Athena and me, and they threw rocks at him. Little shits.

So no more late night potty breaks for Athena, but she’d rather snuggle and sleep anyways, so I don’t think she cares.

Ramadan lasts until July 17, and we will savor the quiet walks until Ramadan starts again on June 7, 2016!

Having a dog in Dhaka isn’t easy.  There are tons of stray street dogs, we can’t walk Athena in any of the nice well-maintained parks, guards yell at us if she takes care of business in front of their gate/wall, there aren’t many sidewalks (and there are lots of speeding cars), and the climate makes it a less-than-pleasant experience for everyone.

That said, I am really glad we have a dog here.  Walking Athena is the best way to explore the neighborhood because people generally leave us alone. Without her, I would rarely go outside.  I work from home, and there aren’t many errands to run since we don’t have a car yet, so it’s much more comfortable to just stay inside.

Plus I’d be miserable without her unconditional love and companionship.

The best way to relax after a walk: lying on a fluffy rug on the cool tile, snuggling with a toy

There seem to be two different kinds of off-leash dogs running around the streets of Dhaka: stray dogs who live on the street, and guard dogs who sometimes roam around freely. There are mean and nice dogs in either category, and in our neighborhood they are generally left to do what they want (rather than being beaten or mistreated).

We’ve settled into a walking routine.  In the evenings, when we are both home, I take the leash and Nate has his hands and legs free to scare away the mean street dogs. Some people walk their dogs and carry and big stick to scare the strays away, but we haven’t needed to do that yet.  There are some nice stray and guard dogs that Athena has made friends with, and when she comes by, they come running out to greet her.

The dog interactions are a lot less complicated here than they are in the U.S.: if a street dog is barking at you, stay away, and if a street dog seems nice, you have a new friend.  Because many of the street dogs have never been on a leash, their behavior is much more natural and less strained than that of dogs in the U.S.  When street dogs greet Athena they come up from behind rather than running straight at her, which is definitely what she prefers, and they are quick to submit to her.

Apparently yesterday morning, while Nate was puzzling out a billboard, a stray snuck up on them and by the time he noticed the dog, there was a lot of happy butt sniffing happening.  Athena and the stray ran around and played together, until some other strays a block away start barking and Athena’s new friend scurried off.

I think Athena is happy here.  Each walk is an adventure, whether it’s meeting a friend, human or canine, or encountering new things, like chickens in the street or hoppy bugs in the elevator.  She’s made lots of doggie friends, including her new best friend, a reformed street dog named Reggie.  Her quality of life will improve when we move into our permanent housing next week, which has a huge roof terrace with lots of grass.  There’s even a faucet where we’ll be able to fill up her puppy pool!  Apparently there’s also an undeveloped area about 20 minutes away where expats take their dogs to run around on the weekends.  We’re excited to explore that once we have a car.

Athena knows her crate is her safe comfy place, and she’s started taking naps in it. In this photo you can also get an idea of how huge her crate is– I could climb in there with her.

Most expats have their household staff walk their dogs, but we aren’t planning on doing that.  Walking Athena is such a part of our daily routine, I’m not willing to give that up.  I am glad that I savored those last walks in our neighborhood in Virginia, where Athena could run off-leash through the fields and I wasn’t sweating my ass off.

Life in Dhaka, and everything that that encompasses, is our new normal, and we are all slowly, but surely, getting used to it.