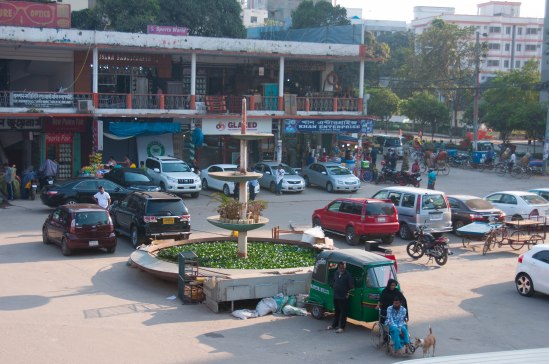 Usually the parking lot is packed with cars. I had no idea there was a fountain.

Before I left in August on OB medevac, I went to DIT-2 fairly often.  Then the unpleasantness happened, and DIT-2 was outside of the red line and, therefore, out-of-bounds.

Recently, the red line shifted, and now we can go to DIT-2 again.  And that is kind of a big deal because now I can resume buying jewelry with reckless abandon.  Nate is thrilled. 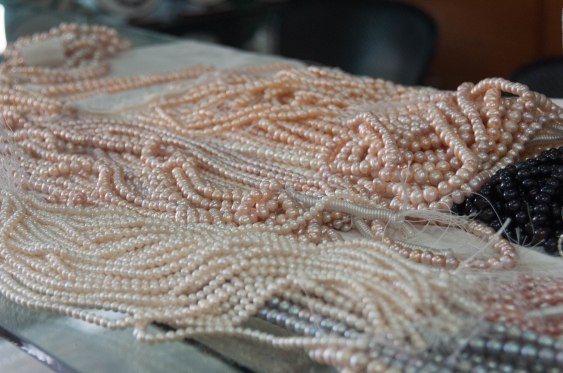 A small sample of the pearls available here

I can’t mention DIT-2 without talking about the last time I went there before flying back to the U.S. It was a Sunday in the beginning of August, around 10 a.m., and it had rained a ton overnight.  Most stores are closed on Sundays, and a large part of the DIT-2 parking lot was roped off, so my driver dropped me off near the curb in an area loaded with enormous puddles.  At this point I was 33 weeks pregnant and my sense of balance was… off.  Anyways, I thought it would be a good idea to leap over one of the puddles, so I aimed carefully and jumped over a puddle probably five feet wide.

Except my foot didn’t hit the spot it was supposed to.  In fact, it landed in an underwater pothole full of six inches of water and I hit the ground in a spectacular fashion.  All I can say is thank god I decided to wear pants that day instead of a skirt.

I fell on my knee and banged it up so badly, it was sore for several months and, now, over six months later, it is still red and scarred.  My handbag and shoes got filled with water and I twisted my other ankle, scrapped my hands, tore my pants and got blood everywhere.

As much as I’m glad we can go back to DIT-2, I think the vendors are even happier.  I have a jewelry vendor that is my favorite, and he was very excited to see me.  Undoubtedly because he knows I’m an easy mark.  Anyhow, here are some photos from my most recent trip to DIT-2.

The DIT-2 Anthropologie of knobs

Compasses and other ship paraphernalia 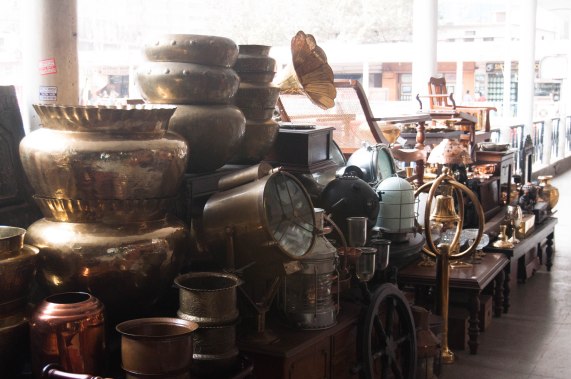 Lots of brass stuff.  I wonder if that gramophone works.