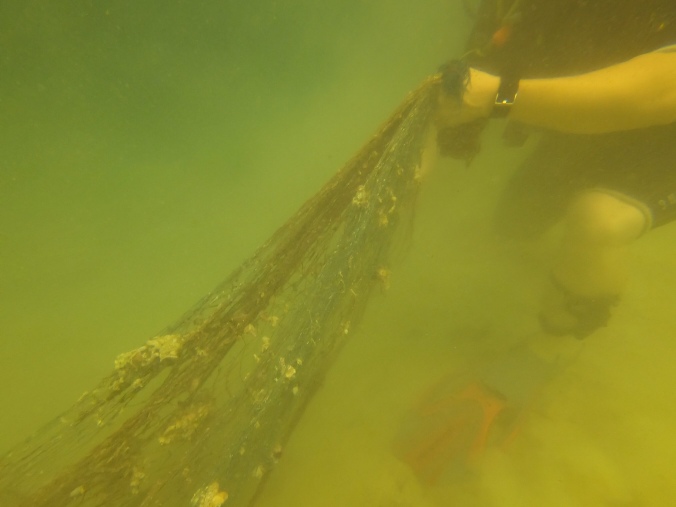 It’s time to get this fishing net out of the ocean!

Last month, EuroDivers led a day of no-cost scuba diving at Bandar Al Khairan to clean up some popular dive and snorkel sites, and it was awesome. As I was reading through the April EuroDivers planner, I saw “FREE DIVES” and I signed up immediately. It meant taking the day off work, but would you rather sit in your office all day or go scuba diving for free to help the environment? The answer is obvious.

I was able to recruit one friend to come with me, and we piled into the dive boat at Marina Bandar Al Rowdha at 8 am, along with six other divers and two dive leaders, to make the short trip to Bandar Al Khairan. We reached the dive site, where we were given scissors, knives, and mesh bags, and then the real work began! Our goal was simple: remove as much garbage and nets from the ocean as we could before we got low on air or had been underwater for 60 minutes. 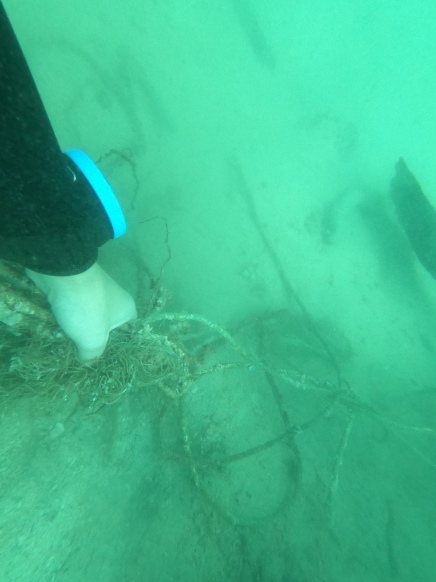 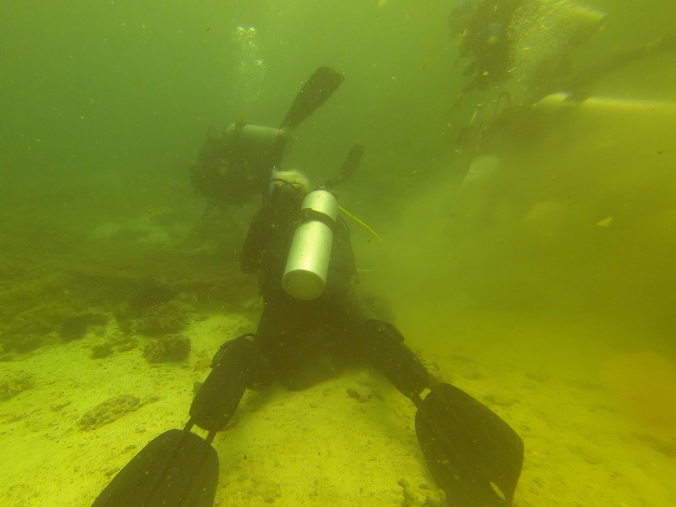 Working on cutting the net apart

The team found an enormous fishing net underwater, resting on the reef, and we got to work cutting it into segments and carefully removing it from the coral. We were intentionally over-weighted because we knew we’d be spending most of the time at shallow depths. When you aren’t very deep and your air tank is less than half full, staying at the bottom can be a challenge. So, maintaining a neutral buoyancy in this case was a little challenging.  We had to hover over the spiky coral and sea urchins, taking shallow enough breathes that we wasn’t moving up and down constantly, while hacking at this fishing net and dissecting it away from the coral. It was like doing hovering underwater coral surgery.

We filled up the mesh bags with garbage, large segments of fishing nets, ropes, plastic bottles, and anything else we could find. Once the bags were full, we took them to the surface and handed them off to the boat captain, who would empty them out and give them back. Then we’d go back down to pick up even more. It was challenging, tiring, and rewarding work! 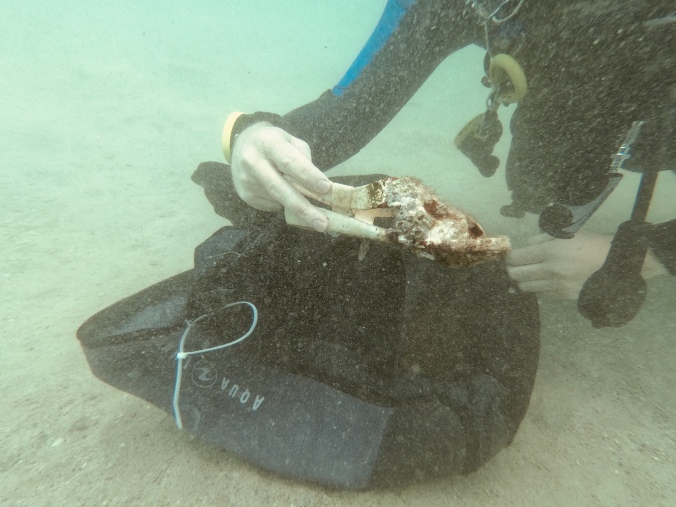 Our maximum depth was about 8 or 9 meters for each dive, and each dive was about an hour, and everyone was making multiple trips to the surface to drop off the garbage. After my last trip up, I descended where I thought I saw bubbles (which means other divers are below you). But the current was so strong, it had pulled me away from everyone else and when I got to the bottom, all I could find was a sting ray. I watched the ray glide away and then I ascended.

One thing to note: the water is warm enough that it’s possible to wear a shorty instead of a full wetsuit. I opted for the full, which, in hindsight, was a smart choice. I spent a lot of time kneeling in the sand, and several of the other divers wearing shortys cut up their knees and elbows. The full wetsuit zipped up in the front, I just unzipped it after I put on my BCD and there was enough water circulation that I didn’t overheat, even though it was physically strenuous work.

If you like the idea of scuba diving for free to help the environment, you’re in luck: EuroDivers is planning to do clean-up dives once a month. They are during the work week and you need to be Open Water scuba qualified. Contact EuroDivers at eurodivemuscat@gmail for more info. 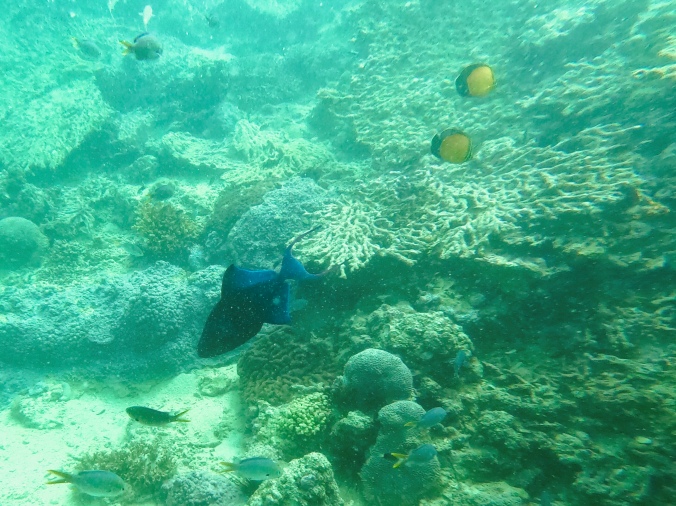 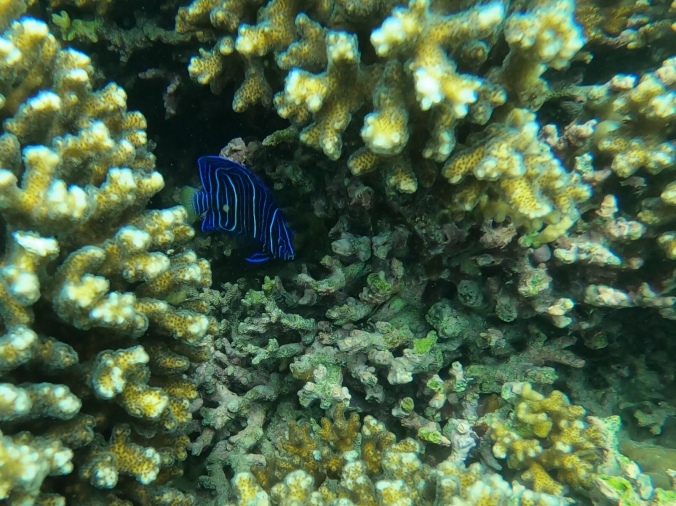 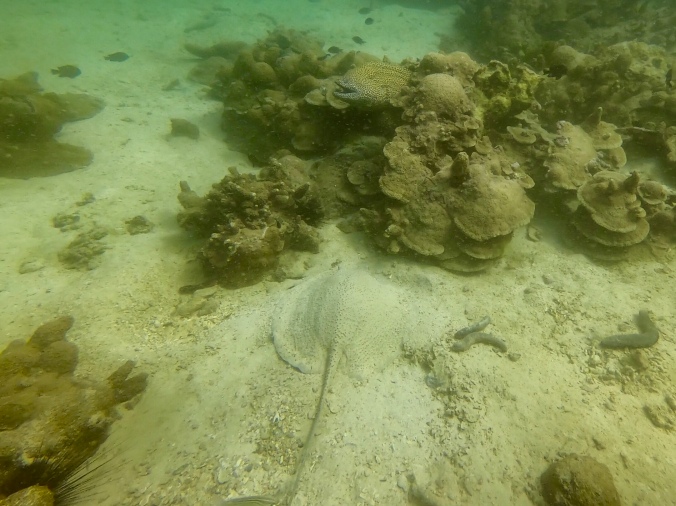