While we were visiting the Bat and Al Ayn tombs, we also checked out Wadi Dhum. It was totally worth the long drive out. The water is beautiful with lots of spots to jump in, the canyon itself is lovely and the rocks are surprisingly very interesting.

One of the best things about the hike to the end of the wadi is that it’s actually a pretty quick hike. I’d say 45 minutes maximum, and that included jumping into some pools along the way. It’s also more of a true wadi hike because you do have to scramble over some rocks and look for a relatively-unobstructed path. The only downfall is that it’s a 3 hour drive from Muscat.

On this wadi hike, make sure you bring a dry bag you can stash all your stuff into and shoes that you can wear both in and out of water. Also, as usual, bring plenty of water, snacks, and sunscreen! 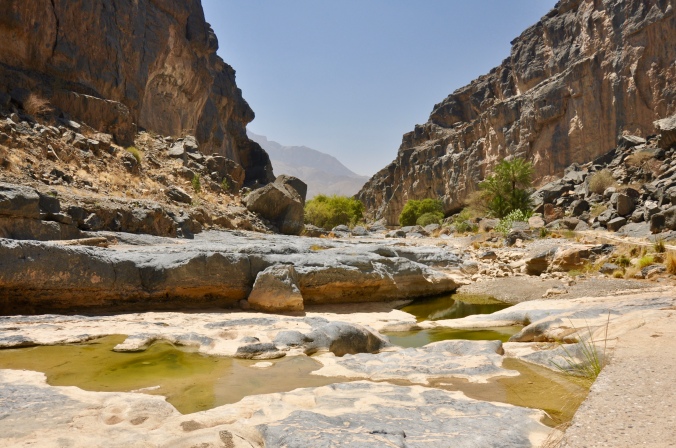 Oman Off Road has good advice for how to reach the end of the wadi, but I’ll go through what we did and what we’d do differently next time. First, if you have a high-clearance vehicle, you basically drive down the wadi bed until you can’t go any further. Park to the left under the rock ledge by the falaj if you want your car to stay shaded. If you’re driving a sedan, you might want to pull off the road where you can and park there because the closer you get to the parking lot, the more big rocks there are jutting out that could scrape the bottom of your car.

After you’ve parked, head up the wadi towards the dam. It’s maybe a 5 minute walk, and you could walk along the falaj or on the wadi bed. Cross the dam on the right side, and stay on that side for an easy walk to the a small waterfall with a massive boulder on the left side. Or, after crossing the dam go over to the left and jump into the first crystal blue inviting pool that you see to cool off. Then scramble over some slippery rocks to get to the right side with the trail to get to the waterfall. To the left of the enormous boulder by the waterfall you’ll notice a rope going up a rock into a cave-like rock formation. To proceed, either climb up the rocks by the waterfall (which I think would be possible if the rocks aren’t too slippery) or use the rope and climb up. If you take the waterfall route, bring a drybag for your stuff because you’ll have to swim to the rocks. 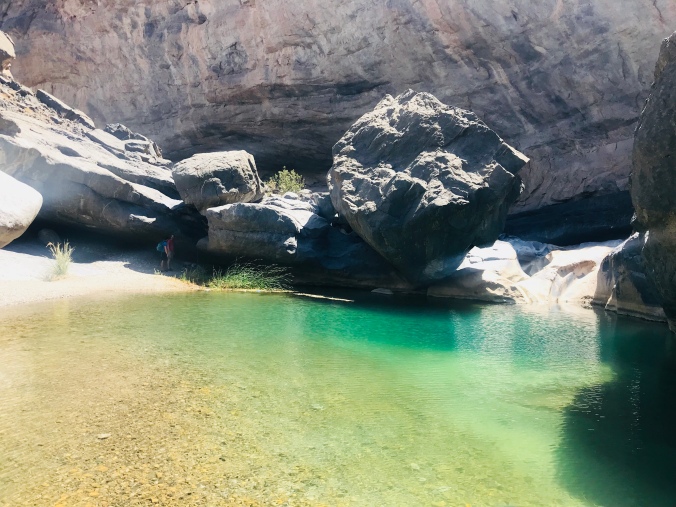 The rope is to the left of the large boulder, where the guys are standing. 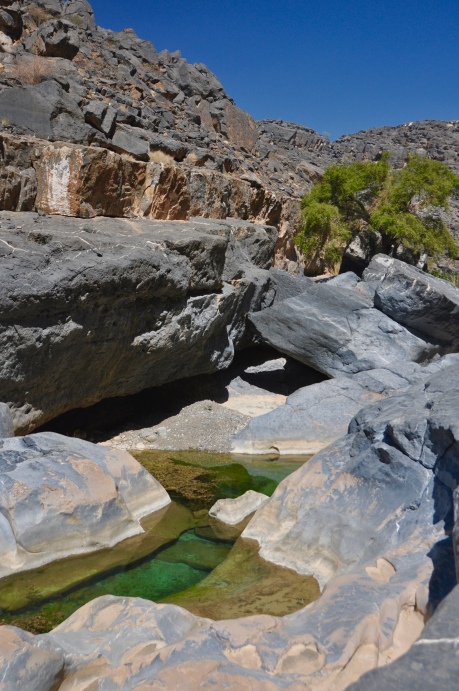 The view along the hike through Wadi Dhum

From here we kept to the ledge on the right side of the wadi, which eventually spat us out a good bit above the final pool. The wadi eventually makes a 90 degree angle to the left and ends with a cave full of bats. Right before the wadi turns left you’ll find the last few pools. Getting down to the pools involved leaping over a big gap between two rocks and then clambering down while being careful to not touch the black rocks, which by 2 pm were burning hot. Then you go down through an opening in the rocks to climb down into the pools.

In the beautiful final wadi pool

Next time we’d stay on the right side of the wadi, but stay closer to the water rather than going up. Leaving the wadi, we climbed and swam through the water until there were easy ledges on either side. This route is definitely easier than the one we took coming in. You’re on the same side of the wadi as before, but there’s less climbing, scrambling and leaping over rock gaps.

We reached the point where you’d have to use the rope to go back down the slippery rocks and we figured out how to avoid that entirely. Keep to the left side of the wadi, and you’ll notice a path that goes up past the waterfall on the left side. You’ll have to scramble up a dicey area full of loose rocks and thorny shrubs, but if you just keep looking where you’re going, you’ll be fine. Note that this particular stretch of the hike is why I would not recommend taking this route entering the wadi. If you slip and fall going down, there is nothing stopping you from basically falling down a steep incline and off the side of a cliff. But going up it isn’t bad. After the dicey part you come to a nice wide path along a ledge in the wadi and you just follow that until you’re near the car park. It’s easy enough to walk down the hill and climb over a few rocks from there back to the car.

View out of the wadi towards the carpark as you leave. Keep to the left on the rock ledge, and then scramble up when the ledge stops. I promise there’s a trail up there.

Alright, so I reread my directions and they’re a bit confusing. If you plan on going and have any questions, please feel free to reach out to me personally!

One thought on “Wadi Dhum”