Oh, man. Winter is going by way too quickly. I feel like I blinked and January was over. Why is it that time always flies when you’re having fun? Never in my life have I been like, “Well that sucked. Thank god it was over quickly.”

Nate and I spent five days in the Maldives and it was the most vacationy vacation I’ve ever had. It was fantastic. In case you have questions about our trip, here are my responses to the most common queries:

Our bungalow was the third one.

While we were away Athena stayed at Jebel K9 and she had a great time. It’s kind of out in the middle of nowhere, about 45 minutes from Muscat, and the hours aren’t exactly work-friendly, but I think it’s the best boarding you’ll find in the area. I drove down the driveway to the main house and felt like I was entering Doggy Manor. The dogs are kenneled in a huge fancy house and then they have a bunch of dog runs outside in a humongous compound where the dogs play with handlers and with each other. She came home happy and tired, so I’ll take it.

M has started going to half-day daycare/preschool and it’s been great for him. He and one Korean girl are the only non-Arab children in the class, and he’s even getting Arabic lessons once a day (the school operates primarily in English).  The school focuses on developing children into responsible, helpful, and mindful citizens, so they’re learning about gardening, recycling, helping around the house, and community service. Recently he had a field trip and the school sent a text message telling all the parents they need to give a carseat for their child to use that day. In a country where you see children riding on the driver’s lap, hanging their heads out the window, this was great to see. Let me know if you need Muscat daycare/pre-school recommendations, because we’ve been very happy so far!

Not a bad view for a road race!

A few weeks ago I ran my first half marathon since October 2014. My training didn’t go perfectly and I didn’t PR, but I ran the whole thing and I finished. And my time was only 9 minutes slower than my last half. The race was through Al Mouj north of Muscat and I thought it was relatively well-run, no pun intended. They didn’t finalize the race course until like a week ahead of time, there was no race expo at packet pick-up, and parts of the course were through a construction site (after which I had to take my shoes off and dump out the pebbles and sand). But they had lots of water stations and they were handing out gels and bananas. Maybe I’ll do a separate post on the race since I think this is quickly getting boring for anyone who doesn’t care about running.

Moving on… We spent Christmas day at our favorite beach with some good friends. One of the upsides of having an artificial Christmas tree is that you can take it apart, so I pulled the top off and brought it to the beach, along with the star tree topper. We drank prosecco and grilled chicken and sausages while the kids played in the sand and chased crabs. It was a perfect way to spend the day and I didn’t miss the cold Wisconsin winter weather for even a minute.

Mother Nature tried to be festive and decorate for Christmas

However, one thing that was odd about the beach that day was the amount of algae. It was ridiculous. The water was bright green. We went back again a few weeks later thinking maybe it would be gone by then, but it wasn’t. One of my friends said she’d heard it was bioluminescent algae (which I can’t mention without thinking of the quote “Oh, I see what she’s done, she’s covered a barnacle in bioluminescent algae, as a diversion.” If you don’t know what I’m talking about, you probably don’t have kids.) so I even drove back to the beach late at night to try to get some cool photos. Turned out it wasn’t bioluminescent, or I wasn’t doing whatever needed to be done for it to be bioluminescent. 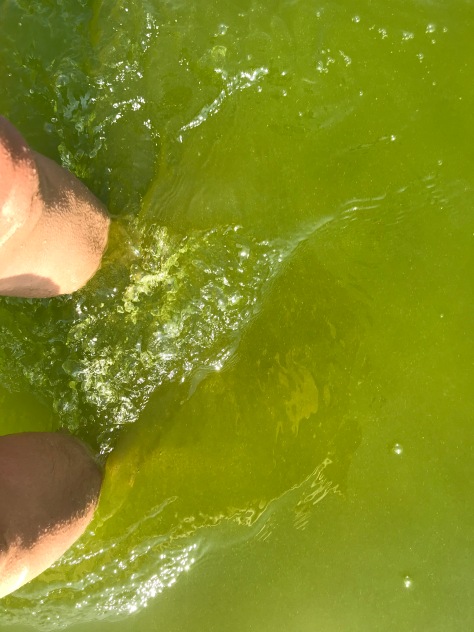 Not bioluminescent, just green and smelly.

We drove to see the beehive tombs at Bat and Al Ayn/Ain a few weeks ago. We couldn’t find the ones at Bat, but the Al Ayn (not to be confused with Al Ain in the UAE) tombs were visible from the main road. I may have shrieked when I first saw them. They are 5,000 year-old tombs that are a UNESCO World Heritage Site, and they are pretty fricking cool. There are supposed to be more tombs at Bat, but the ones at Al Ain are spectacular because of the setting. They are perched on top of a hill in front of a huge mountain and they’re very well-preserved. Once we figure out how to get to the ones at Bat, I’ll write a separate post about that too.

Alright, I have to go finish my book club book. I didn’t finish last month’s and I’m not failing two months in a row! 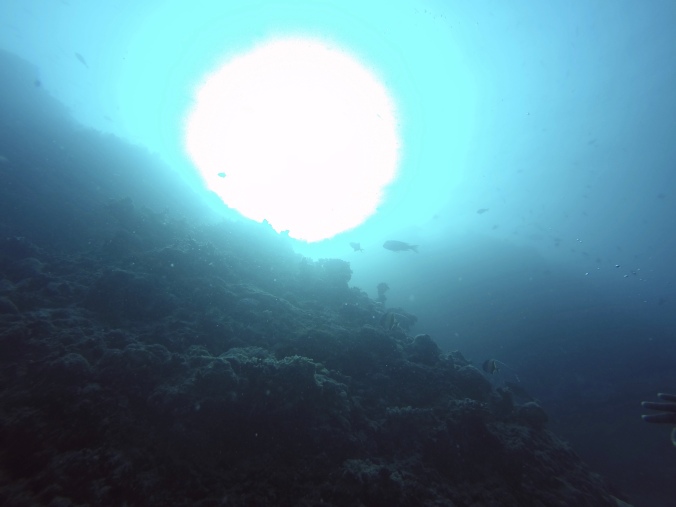 The world looks different from 50 feet under water

That’s right, I am now a PADI open water scuba diver! For me, it’s a pretty big deal. I was really nervous and hesitant, primarily since scuba diving goes against one of my main survival instincts: sinking is bad.

Maybe a year before we were scheduled to arrive in Muscat, Nate said the one thing he really wanted to do was get scuba certified.  My response was a half-hearted “Okay….” and I kind of hoped he would forget about it. But every time someone asked us about moving to Oman, Nate would talk about how excited he was to get scuba certified and I would usually smile wanly and say, “Well, it’s something I’m really scared to do, so I guess that means I should give it a try.” (And in the meantime, I still kept hoping Nate would forget or get too busy or something.)

Fast-forward to Nate’s first day at the embassy here. He came home and immediately said, “I already got a recommendation for a dive shop to use for our scuba qualification!”

Fast-forward maybe another month or so and I had gone on a few snorkeling trips. The one big conclusion I drew from snorkeling was that if I really wanted to see anything, I’d need to learn how to scuba dive. The water is deep in the reefs here and everything interesting is usually pretty far below. I met one of the dive instructors on a snorkel trip and he seemed like a cool dude, and I was slowly starting to come around to the idea of scuba diving. Nate said he wanted to get scuba certified for his birthday, so I decided it was time to bite the bullet and just do it.

A tiny anemone with some tiny clownfish

We decided to use the local branch of EuroDivers, and it was a great experience. EuroDivers came highly recommended because they have no minimum class size and the instructors take their time with the students and don’t rush you through anything.  We did the online theory portion at home, and then we had 3 diving sessions. For the first diving session we were in a swimming pool, the second time we did two dives off a beach, and for the third and final session we did two dives off a boat.

A note about the theory portion: if you plan to do the PADI open water scuba class and you want to do the theory at home, be forewarned that it is a slog. We’re talking five on-line modules, most with over 200 powerpoint slides. It takes a minimum of eight hours and you have to pay attention to the whole thing since they’re basically telling you how to not die.

For the first session, Nate and I were with three other students in the pool, but for the beach dives it was just us and the instructor. When we did the last two dives off the boat it was the two of us with two instructors. The amount of personal attention we received was really helpful given my inclination to freak out.

Reef wall in the Maldives

Initially I didn’t think I’d ever enjoy it, but now I love it. It’s incredible to think that the earth is over 50% water, and humans get to see less than half the world. On our second dive off Fahal Island we were encircled by a massive school of little barracuda. We swam over moray eels with heads literally the size of a person’s head, which was alarming but incredible. In the Maldives we dove along a reef wall that was over 100 feet tall. By scuba diving you get to see some of that other 50+% and as long as you float along and don’t touch anything, you are able to move easily in that other environment. That, my friends, is amazing and it’s a surreal experience.

If you’re thinking about getting scuba qualified, do it! If I can do it, anyone can.