We’ve been in Muscat for over two months now, and at this point it seems like the honeymoon phase will never end. Oman is incredible and we still have so much to see! 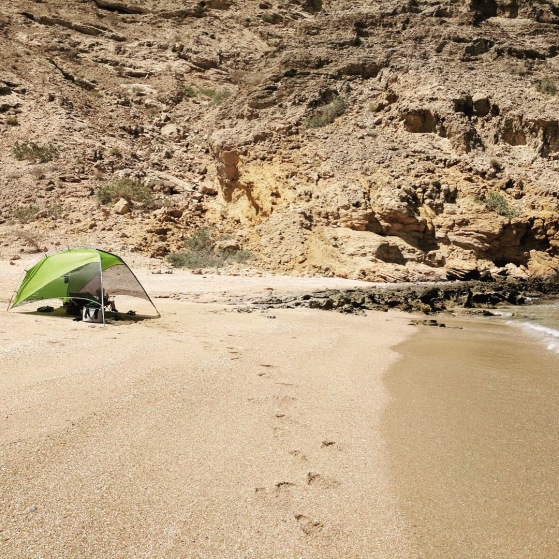 Our favorite way to spend the day

We set the goal of going to the beach at least once a week, and so far we’ve been hitting our target. We’ve explored several beaches within an hour drive from Muscat and there are some really amazing ones. Our beach tent/shelter thing just arrived in the mail, as did Marlowe’s camping chair which he is very excited about, and we are slowly getting fully outfitted for our beach days. I haven’t had this much beach time since I was a kid and it is a lot of fun.

Before arriving here we’d basically stopped going to restaurants because M isn’t patient enough to sit still for that long. Personally, if I go to a restaurant and I’m sitting there enjoying a nice meal, I get annoyed if a toddler is yelling a few tables away or a shrieking child goes running past. The last thing I want to do is subject other people to something that drives me absolutely nuts. But here, everyone likes kids. If M is running around a restaurant, everyone smiles at him and reaches out to touch his blond/white hair. So we’ve slowly started to explore local restaurants and there are some great ones. Lots of restaurants have water features and, if you go outside, stray cats which are obviously a huge hit with kids.

Our car, her name is Jasmine, arrived from the US last week, and today she got an inspection, new tires, and diplomatic plates! For the first week after she arrived she was essentially just an expensive car port ornament, since we had no plates and couldn’t drive her anywhere. They checked the window tint during the inspection and Jasmine’s rear-most windows are very lightly tinted, which thankfully wasn’t an issue. But I’d be lying if I said I wasn’t nervous. Then there was the tires… I remember when a tire blew on our SUV in Dhaka and it was an all-day fiasco. Our driver went to three different shops to get prices on tires, and we ended up spending an arm and a leg. Here I drove to a mechanic, they gave me a reasonable quote, and it was done in an hour.

Our Dhaka HHE is still not here. It’s really annoying. This is one of those things that I struggle with because we are so lucky to be getting a shipment at all on the government’s dime and what kind of spoiled brat complains about that. It is, after all, just stuff and at least it will get here eventually. I left Dhaka in July 2016 so I’ve been living without my Dhaka things for nearly a year and a half. Clearly it’s stuff that I can survive without. On the other hand, I really like most of the things I left in Dhaka and it would be great to put some pictures on the walls. It would also be nice to have more than 4 dinner plates (but why am I complaining about how many dinner plates we currently have? How awesome is it that the State Department provides a welcome kit with dinner plates and stuff to tide you over until your shipments arrive? I should be grateful we have any dinner plates at all.) Plus I want my mattress and blankets. And my Dutch oven, awesome toaster, cake pans, serving dishes and cutting boards.

While snorkeling I saw a turtle!

Rather than ending on a whiney note, I’ll leave you with this: I was on a snorkeling trip and one of the women on the boat asked if there were sharks. Our guide, an Omani, said, “You’re in the sea, of course there are sharks. But you’re in Oman, so they are very friendly.” I doubt that’s accurate, but I appreciate the sentiment!