A few weeks ago we met up with Nate in Costa Rica.  He had one last R&R and we wanted to go someplace with a beach, but no super-long plane rides, in the same timezone as the Midwest, and Costa Rica fit the bill perfectly.

Dude, Costa Rica is AMAZING. We were in and out of the airport in less than an hour, and it was so easy to drive around and explore. We had a fricking awesome time, even though M got some stomach bug and we spent the first several days cooped up in our beach house. Thank god we had a washing machine and dryer. But this was our view, so even that wasn’t too bad. 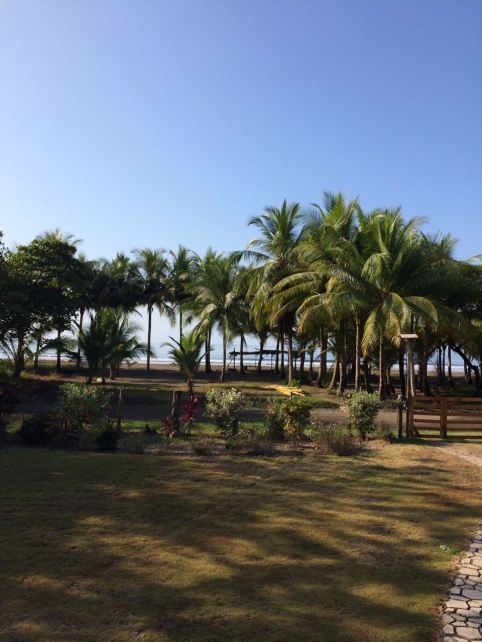 The view from our front porch: coconut trees and the Pacific

The house we rented was about 30 minutes west of Quepos, along the Pacific Coast.  We spent the whole time in that area, exploring literally everything the guidebook had to offer. Here are some of our favorite things we did.

Marino Ballena National Park: This is a beautiful national park with uncrowded pristine beaches. The majority of the area protected by the park is aquatic, which is pretty cool. There are several different beaches, and our favorite was Playa Pinuelas.  It was slightly protected from the open ocean so the waves weren’t too big, and we could drive up to the beach, so we brought beach chairs, sand toys, etc. 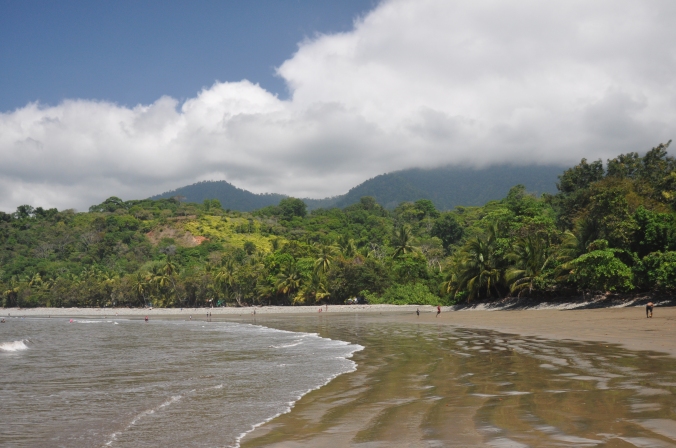 Cascada Nauyaca: You can hike or take a horseback riding tour to this waterfall.  We hiked, and it really wasn’t too bad.  It was 5 miles roundtrip, and we were lucky on the way up because it got cloudy just as we were hiking a long section with no shade. It was nice to have hiked there on our own rather than going with a group because we could stay as long as we wanted.  It was so amazing and the cold water felt awesome. I would avoid doing the hike during the rainy season because you’re either going uphill or downhill at least 90% of the time and the trail would be a muddy slip-n-slide.

Alturas Wildlife Sanctuary: This sanctuary on a mountainside provides medical care and rehabilitation for wild animals that are injured, taken out of private homes where they were pets (the law prohibits keeping animals other than dogs or cats as pets in Costa Rica), or are somehow unable to keep living in the wild.  We toured the sanctuary and saw the animals they weren’t able to release back into the wild for one reason or another.  They do an amazing job caring for the animals, and the tour was really interesting.  Afterward we had cocktails and enjoyed the view.  It was a great way to spend a few hours, and M really loved watching the animals, especially the monkeys.  The monkeys were cute and definitely interesting.  One of them kept hurdling rocks at the cage and another was on anti-depressants and anti-psychotics.

The view from the sanctuary/hotel patio

Manuel Antonio National Park: This park is beautiful, there is tons of wildlife, and the beaches are ridiculously picturesque.  For all these reasons, there are also lots of people. The park does limit the number of people allowed in each day and you can avoid the crowds if you get off the main paved trail that runs through the park. We packed sandwiches and went in with the idea of hiking the trails and then going to the beach, enjoying whatever wildlife we happened to spot along the way. This worked out well.  We saw lots of tour groups crowded around a telescope or with binoculars, and there was no way M would have had the patience to literally stand around and wait for a butterfly to open its wings. Frankly I don’t think I had the patience for that either given how hot and humid it was. We saw lots of monkeys, a sloth, raccoons, a deer, and coatis.

Manuel Antonio beach was very popular and the water was quiet. 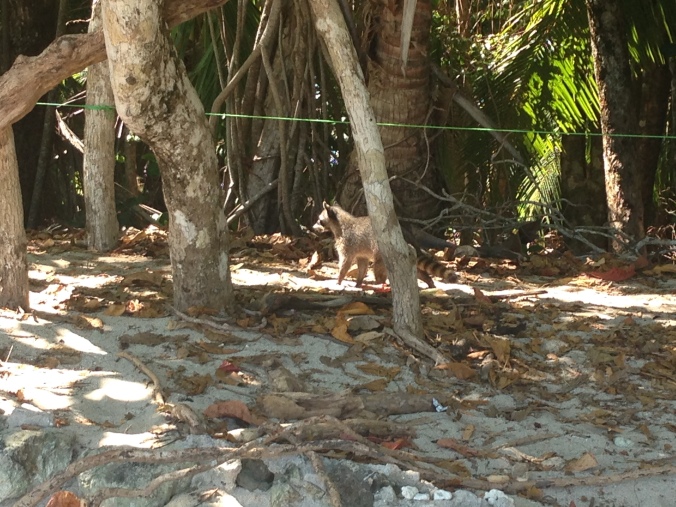 The raccoons were out of control. They would dig through unattended bags looking for food, and Nate watched 3 raccoons and a coati duke it out over a sandwich

Sunsets and cocktails at the beach: Each evening after we got back from our daily excursion, I’d make a cocktail and sit on beach and read. Nate and M would play in the sand and have fun, and it was glorious.  The sunsets from our beach were stunning.

One of the many sunset photos. I haven’t even edited this!

Other things we enjoyed were Hacienda Baru (nice hiking paths and lots of wildlife), Cascada Verde (nice little waterfall that you can slide down with lots of shallow pools; follow the signs from Uvita and stop right before the security camera signs where there is parking on the right), and exploring restaurants along the coast. Our favorite was Por Que No? in Dominicalito. It reminded me of The Village in Pohnpei. We loved everything about this place.

We avoided Quepos and the Manuel Antonio area. Both were completely crowded shit-shows.

Here are some general tips for Costa Rica (keeping in mind that we only explored one small area of the country and I’m not an expert):