Oh, Flag Day.  What an emotional, exciting, panic attack-inducing day.  The most highly anticipated event of any A-100 class.

We had planned on going through the bid list on Thursday night and naming a positive aspect of each post so that we would be prepared for whatever Flag Day would bring.  But I was out late with our friends who were moving the following day, and Nate had loads of homework to catch up on, so that didn’t happen.

The next morning was like Christmas morning when I was a kid: I bounded out of bed earlier than I had planned, and I spent all day anticipating the afternoon.  Luckily I had a lot to keep me busy, otherwise it would have been the longest day ever.

That afternoon, I arrived at the FSI and sat with a fellow EFM.  The room was full of nervous excitement that just made everyone even more nervous and excited. Also, I don’t know if people hadn’t RSVP’d with how many people they had coming or what, but the room was short probably 100 chairs.  There were lines two to three people deep along the sides and back of the room. 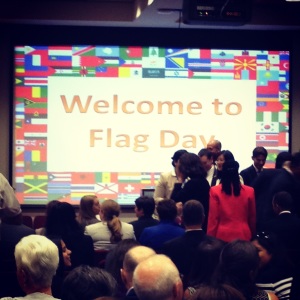 Finally the ceremony started, which included a procession of three people carrying all the tiny flags that they would hand out to each trainee.  There were many standing ovations, many introductions, and all I could think was, “Why don’t they just get started already?!”

The first flag on the screen was Saudi Arabia, which was one of our lows.  They were going through the posts really quickly, and eventually they called Tashkent, Uzbekistan, which was one of the posts that I *really* wanted.  Nate’s name wasn’t called and I felt slightly deflated, but one of Nate’s classmates who really wanted that post got it, and I’m happy for her and her husband.

Anyways, they kept calling off the posts, and eventually they called the first Dhaka post, which was followed by Nate’s name!  Nate cheered and proudly walked up to get his flag and to take an official photo.  Dhaka was one of our highs, a last-minute addition, and I know it’ll be a great opportunity for our family.

Three other people from Nate’s class are also going to Dhaka and I’m really glad to be part of a group of newcomers who will be figuring things out alongside us.

After the ceremony, several FSOs who are going to Dhaka later this year and are currently in language training came up to us and introduced themselves.  They gave Nate a little lapel pin with the American flag next to the Bangladeshi flag and invited us to a reception at the Bangladeshi embassy this coming Monday.  The FSOs told us how excited they are to be going to Dhaka and what a great post it will be.

Their enthusiasm and excitement made me even happier, and I genuinely can’t wait to move to Dhaka!